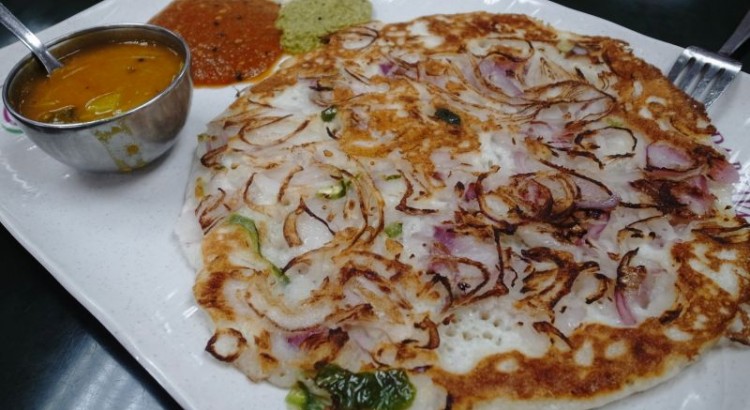 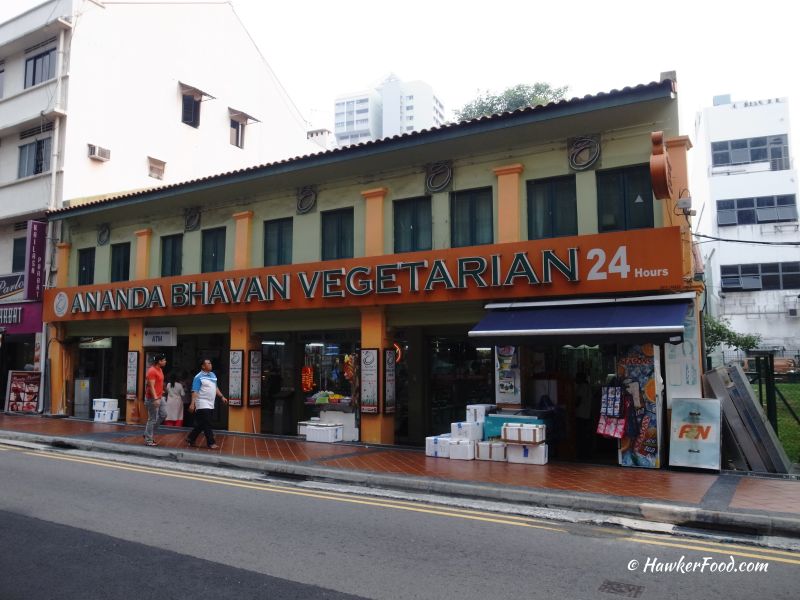 If you love shopping at Mustafa Centre, I am sure you will be bushed and hungry after browsing and buying countless items in the big shopping centre.

Here was Lao Beng feeling famished after my shopping trip at Mustafa, I had wanted to walk to the South Indian Vegetarian Fast Food Restaurant Komala’s Villas for my favourite South Indian food – Bathura/Bhattura/Bhatoora. (Different spellings but almost the same pronounciation.)

I happened to see Ananda Bhavan Vegetarian Restaurant located opposite of Mustafa Centre and decided to give it a try.

A brief history on Anandha Bhavan is that they are the oldest Indian vegetarian restaurant in Singapore and was established in 1924 specializing in South Indian cuisine. 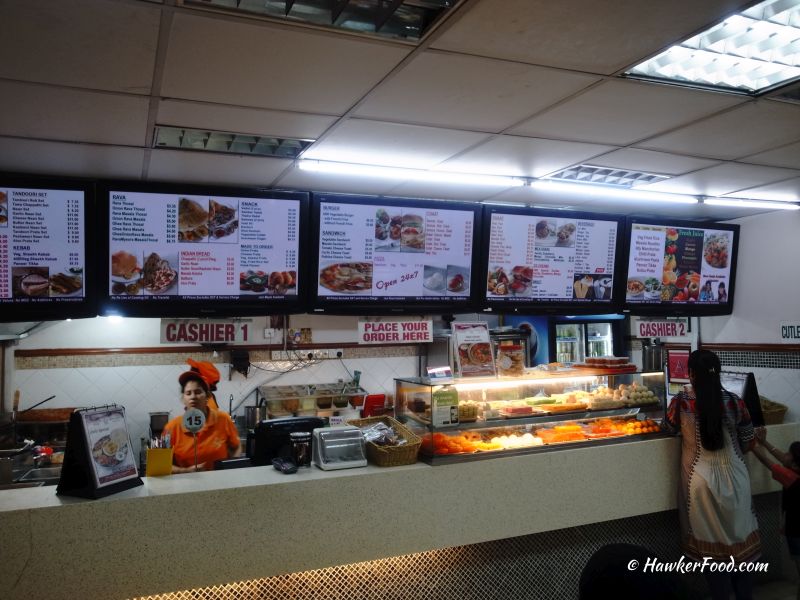 The moment you step in, you will notice that the cashier is on the left. I was immediately attracted to…

…these colourful and beautiful sweet cakes/desserts on display. I felt like ordering them but decided not to as I wanted to have a proper meal and at the same time cut down on my sugar intake. 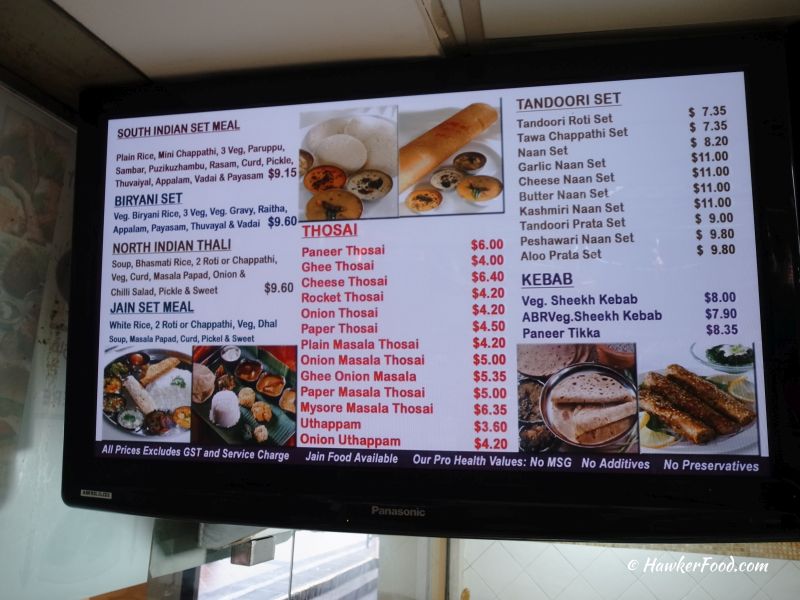 They have large television screens to showcase their menu, I had wanted to order Bathura but decided that I should browse through the menu and try other types of South Indian food.

As you can see from the menu, they have an assortment of varieties for Thosai. North Indian food features on their menu as well. 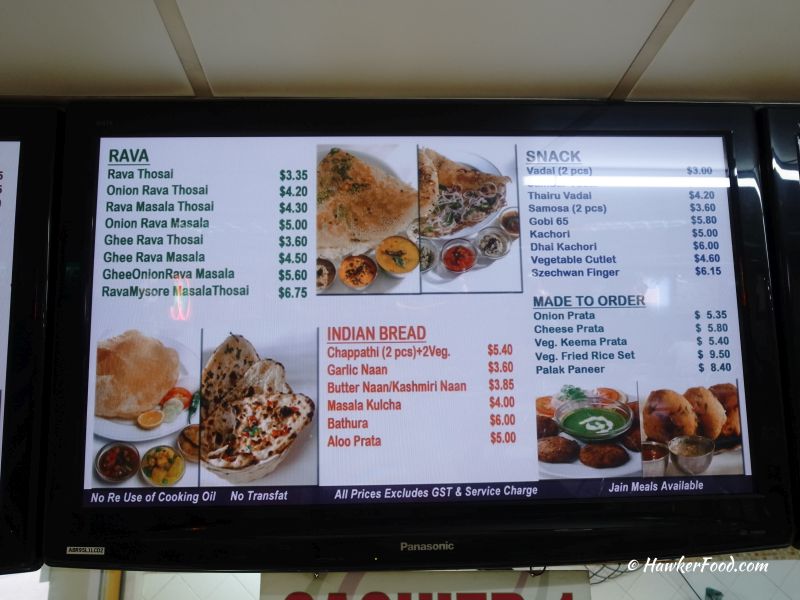 First picture on the left shows my favourite Bathura!! Hmm…well I guess next time then since I wanted to try something else. 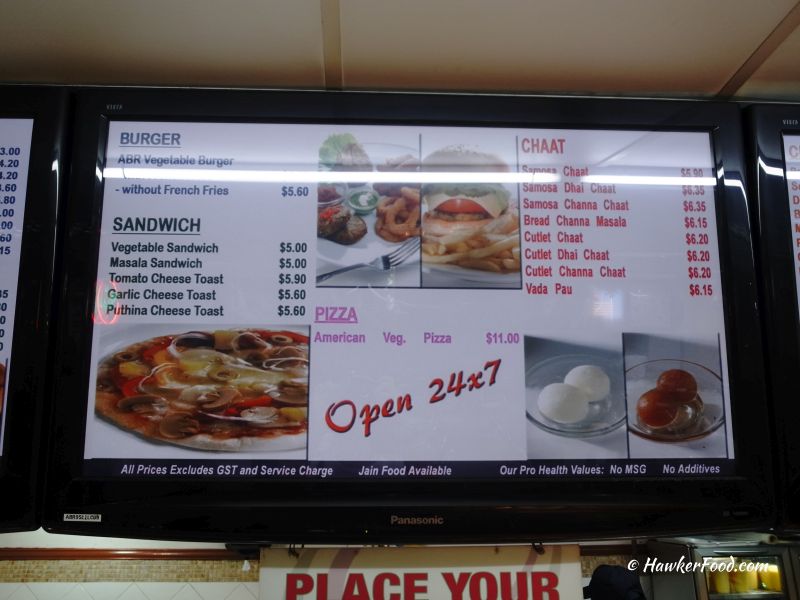 They also serve Western choices of burgers and sandwiches.

One thing I noticed as I read along the menu, the bottom of the screen tells us Anandha Bhavan’s “Pro Health Values”. Basically, they would like to inform the customers that their food does not contain MSG, additives and preservatives. They also do not reuse the cooking oil and the food contains no Trans Fat.

Not bad, they have their customers’ well-being in check. 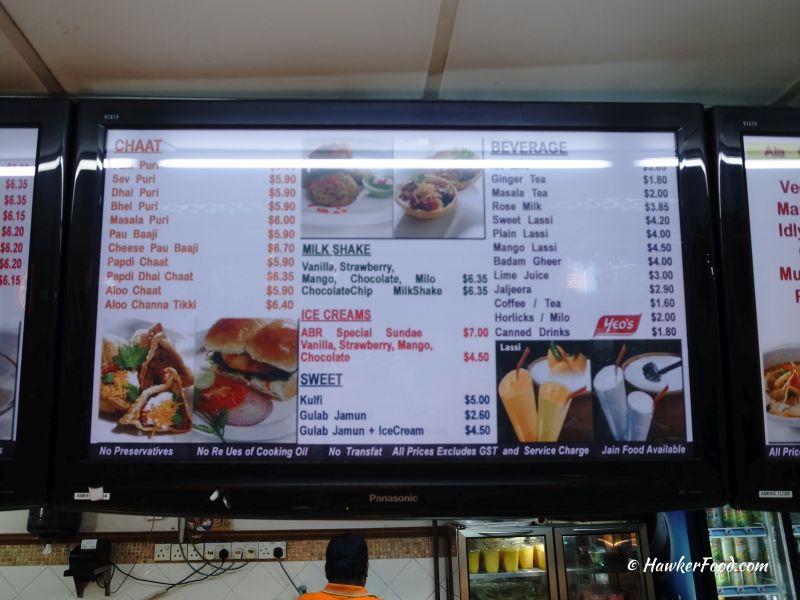 After a long deliberation, I decided to order an Onion Uthappam which cost $4.20 (last item found in first menu under Thosai section) and a cup of Masala Tea at $2 as seen in this picture under the Beverage section.

However, the total bill came to $7.30 after factoring GST and Service Charge. 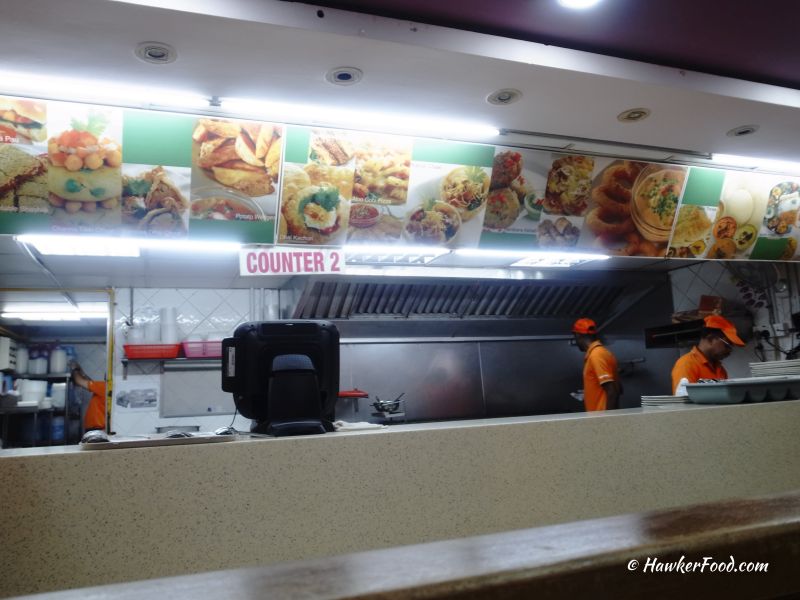 Once I received my queue number, I walked to a vacant table and saw one of their two takeaway counters. Their cooks were busy preparing food for the customers. 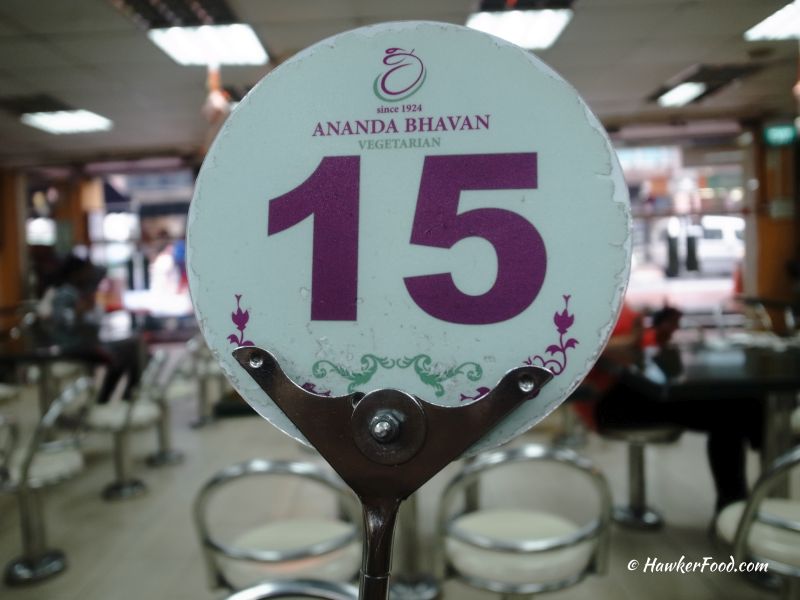 I started to warm the seat and placed the queue number on the table. Almost immediately, a middle-aged lady approached me asking if I wanted my masala tea served now or later.

I asked for it to be served immediately since I was kind of dehydrated from my endless shopping. 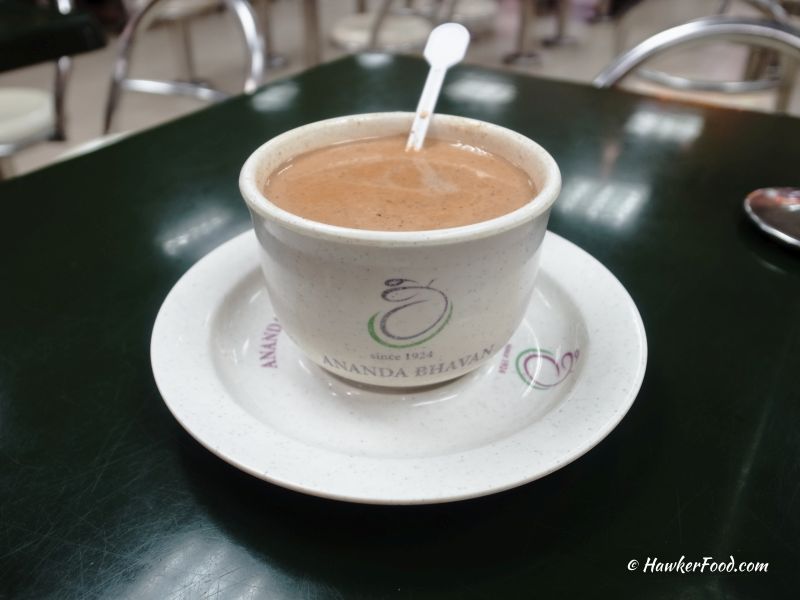 Within a minute, she brought the masala tea to me. “No wonder there is a service charge” I thought to myself.

Masala is the Hindi word for spice and it is basically a mixture of ground spices meant for cooking Indian cuisine. Masala tea is black tea infused with aromatic Indian spices giving it a fragrant smell and a sharper taste as compared to the normal tea. I slowly slurped on the warm masala tea enjoying the unique flavour as I wait for my food to arrive. 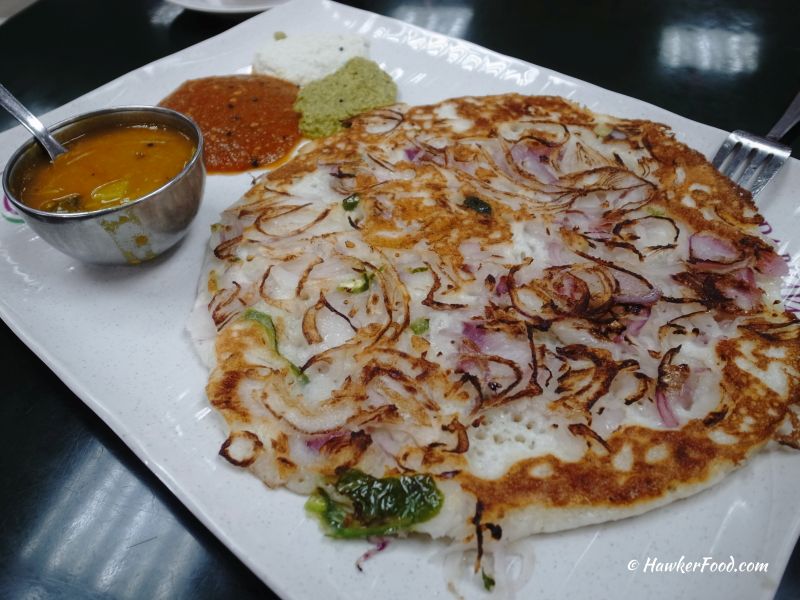 After waiting for about five minutes, my onion uthappam arrived. Look how beautiful it is. 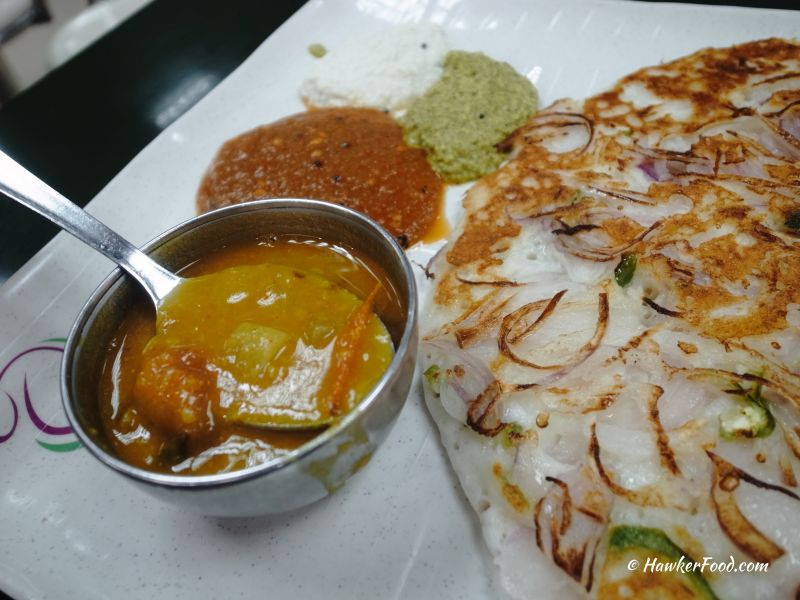 It came with a small bowl of vegetable curry filled with potatoes and spices, as well as three sauces in the colours of red, white and green. I especially liked the green mint sauce and the white coconut sauce. 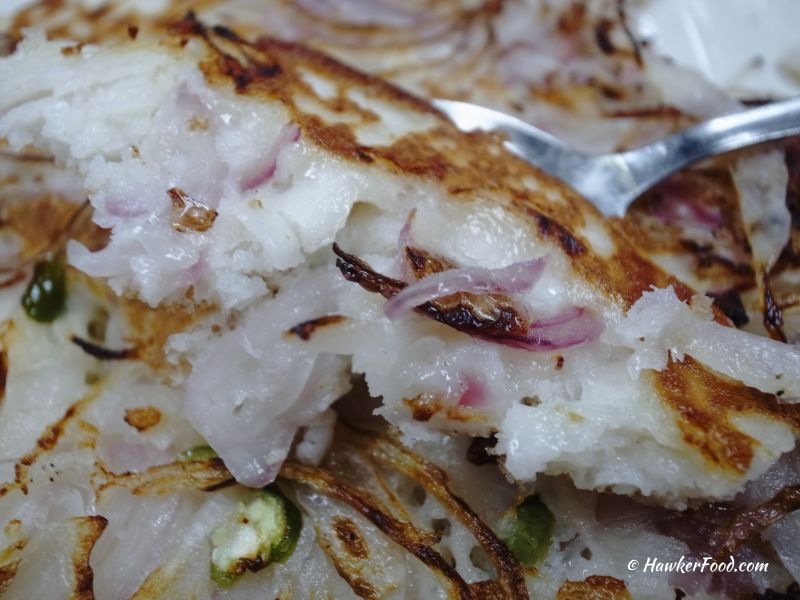 The texture of the onion uthappam was soft and crunchy, filled with generous servings of onions, chopped green chillies and other spices.

If you had eaten thosai before, this is just like thosai fried with onions and green chillies combining to give a sour and spicy taste that indulged my senses. I also loved the crispy burned portions and dipped it into the sauces gleefully and gobbled like no tomorrow. 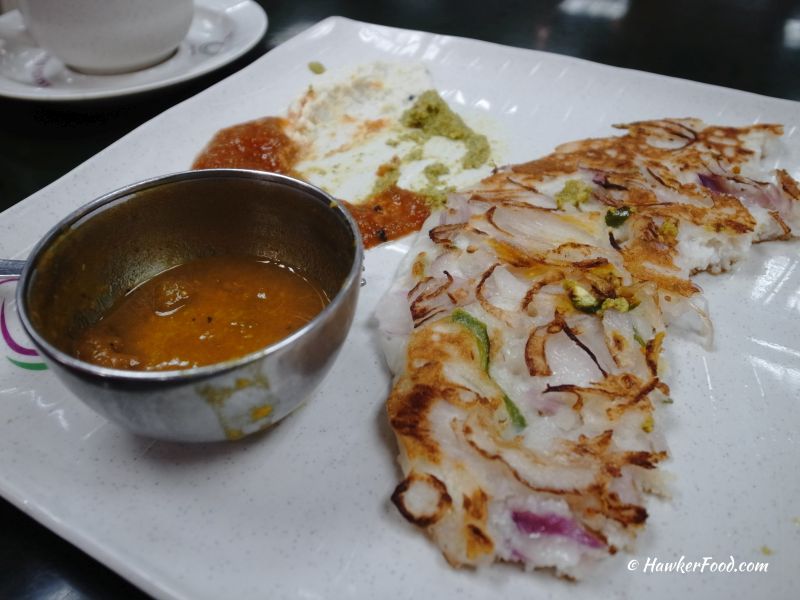 Before I could finish the onion uthappam, I had already finished most of the coconut and mint sauces!! It was very filling and yummy as I continued to finish the last portion and washed down with my masala tea.

If you love Indian vegetarian food and would like to try different kinds of them, Anandha Bhavan is the place for you. Another plus point is their assurance that their food is healthy. Never mind the GST and service charge lah :p

They have more than one outlet, with other outlets locating in Little India and even at Changi Airport Terminal 2. Please refer to their website http://www.anandabhavan.com for the most updated news and locations.